We have probably most likely been experiencing spring over the past few weeks. This should be both a) unremarkable and b) more certainly stated, but winter just kicked the snot out of us this year and I’m pretty sure most people in southern Ontario still have one eye on the winter coat, just in case. (Constant vigilance.) It’s that in-between time when daytime temps are well above freezing and the daylight hours are longer, and it’s not quite warm enough for tee shirts and sandals but it’s probably too warm to get away with a wool sweater, so…that’s spring, right?

My commuter schedule has me dashing out of the house just after dawn, and returning in the evenings a little after most normal people have probably already eaten dinner, and those are the chilliest times of the day. And lo, I discovered this is the true destiny of my Pi Shawl. 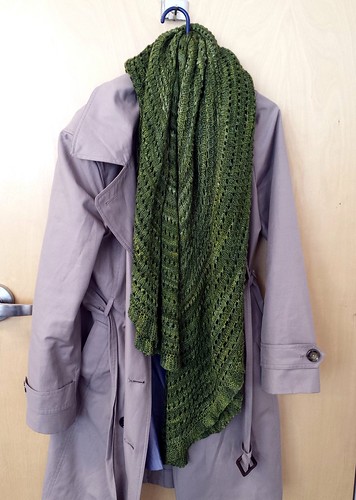 I’ve had my Malabrigo Pi Shawl with me most days for the past few weeks, and it’s great. If you need more coverage on a chilly train you can drape it more widely around your shoulders, and for bustling around town it bundles up great around your neck. Breeze be gone! (And if I may say, having taken a few terrible selfies lately, that a good selfie is a lot harder than it looks. Dangit if the internet isn’t probably flooded with way too many of them, but maybe it’s because it takes stupid amounts of practice.) 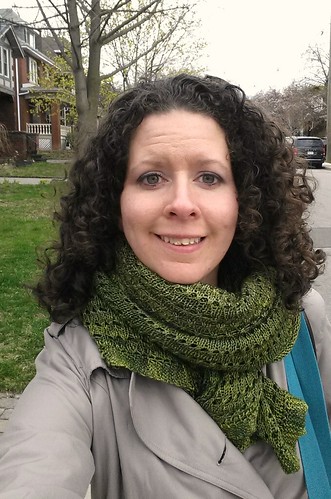 It was only a matter of time, then, before I remembered the Pi Shawl that’s still on my needles, and has been since last September. It’s been such good company for movie theatre knitting, but I think it’s time it saw some real action on the final third of the knitting. There’s something to be said for the round-and-around knitting action – repetitive though it may be, it’s also reassuring in its own way. I’m still deciding what projects to move forward with in the next couple of months, so I might as well get a few more rounds in on this while I decide. The Pi Shawl is just darned helpful that way. 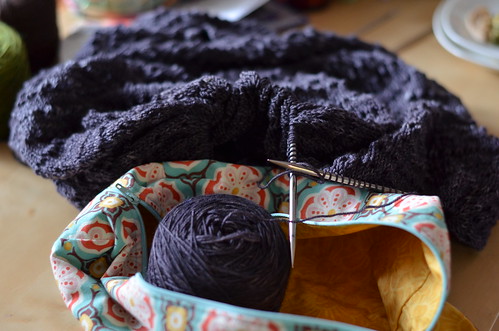