So, it’s sock knitting season, am I right? It always does seem to hit me around this time of year, even before the warm weather starts to make tiny, smaller-lap-real-estate projects seem appealing. Partly because it’s nice to have less obtrusive projects to carry around but also I think coming to the end of a winter season draws the state of one’s sock drawer and all the wear and tear of the latest sock-wearing season into sharper relief. Quick, knit a zillion more pairs before September comes around again. It’ll be like last winter never happened. 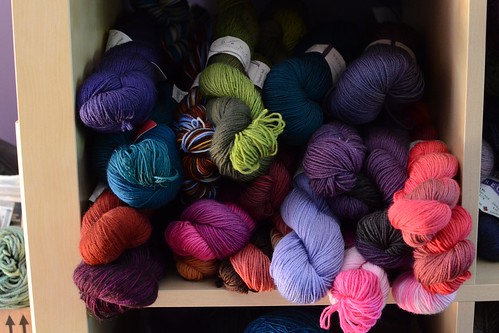 Plus, sock yarn is just so darned cheerful and colourful. 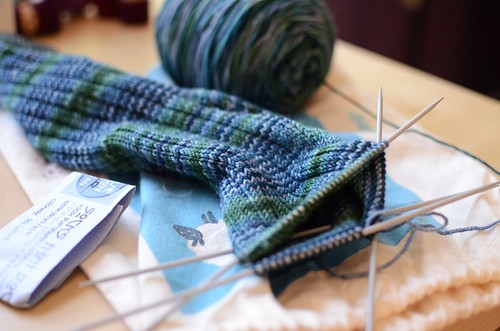 Since March I’ve been diligently keeping an active sock project in my handbag, to fit in a few rounds when there’s time. (Over the winter I’d been letting sweater sleeves take up that job). Helpfully, a couple of months ago when I was rifling around looking for empty project bags, I happened upon a small cache of unfinished sock projects – three, to be exact. All 3 only had part of the first sock knitted, needles still waiting. (So that’s where all my sets of 2.5mm double-pointed needles went.) I finished one of them, then cast on a new pair of Jaywalkers afterwards. 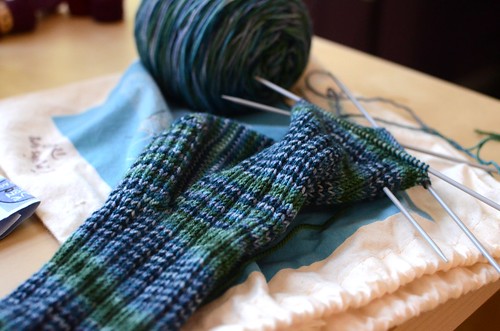 When I finished those, before I immediately went to my sock yarn stash for a new pair, I decided to muster up some resilience and go back to one of the remaining unfinished pairs. Going back to resume unfinished projects is always a little harder, since they’re less new and exciting, but it’s also so worth it to make progress and get closer to freeing up a few more needles and project bags. Plus, it’s almost like having a project pre-started for you, when you’ve had time to forget that you were the one that started it in the first place. 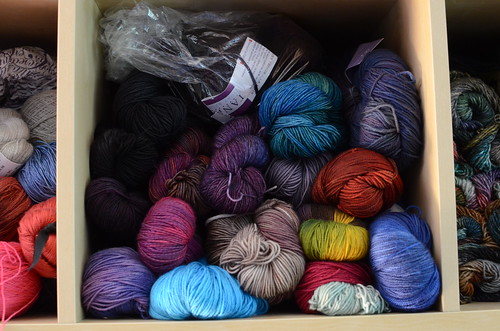 I’ve definitely got my eye on my sock yarn stash again, too. I’ve added to it over several years and I like the collection. I’d sure love to turn more of it into actual socks, though, so I’m going to ride the spring sock knitting momentum as long as I can.