I’ve been merrily knitting along on my portable sock projects lately (so merrily that I took my ‘handbag’ sock project out of the handbag yesterday to knit on them at home, and then forgot about them and had no commuter knitting this morning, whoops), not entirely to the exclusion of other projects but pretty significantly. I’ve got some shawl projects on the go (the always-on-the-needles Pi shawl for one, a triangular shawl design I’ve been pondering, for a second), but only sock projects otherwise. 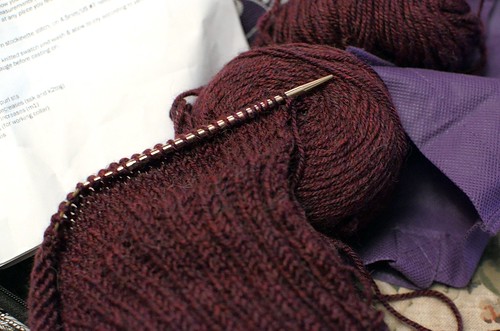 I started to realize that I have actually been missing the sweaters a little bit. Not exactly the same sweaters I hit the pause button on in April (they are both seamless, and at 90% done they are weighty in the lap and less amenable for spring…at least until the air conditioning goes up full throttle), but something with a little more oomph to keep in the rotation. And since I’ve been on a returning to unfinished projects run lately, I remembered that I did start a sweater pattern last summer, eventually put on hold once my commuter schedule took over (as well as, let’s face it, a pretty awesomely time consuming 2-sweater design that I’m really glad to have done).

It’s a pullover of my own devising, pretty basic since I wanted to do up a basic sweater pattern in my own knitting style (in pieces to be seamed, from the bottom-up, set-in sleeves), ideally with both a pullover and a cardigan version for versatility. And you know, I’d still like to do that – both for my own wearing and as a pattern. 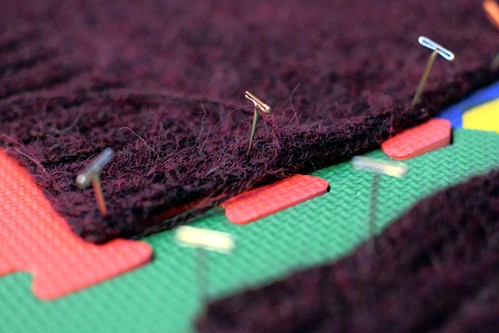 I’d forgotten how far I’d gotten on it by last August, and it turns out it was pretty danged far. Front and back completed and part of a sleeve – on a pullover project that’s practically a finished project. (well, not really, but it’s still pretty close.)

I set out the finished pieces for blocking and picked up the sleeve in progress for some active work in the evenings. This is actually turning out to be more fun than I thought, going back to unfinished projects. I think next time I set aside a partially-finished projects I’ll just have to remind myself that it’s not so much unfinished as it is an almost-finished project for the future.

Also, it turns out I just can’t fully abandon sweaters for too long at a time. It’ll be sweater season again eventually, after all. Happy knitting this Monday, knitter friends!

← The latest
This time last week →