I have reached some unexpected plane of knitterly existence where the idea of simply knitting up sock yarn from my stash has become eminently pleasing to me. I don’t expect it to last forever, and I must admit this isn’t a frequent sort of experience for me (I do so often lust after new projects that I haven’t purchased yarn for yet), but while I’m here I’m going to embrace it. 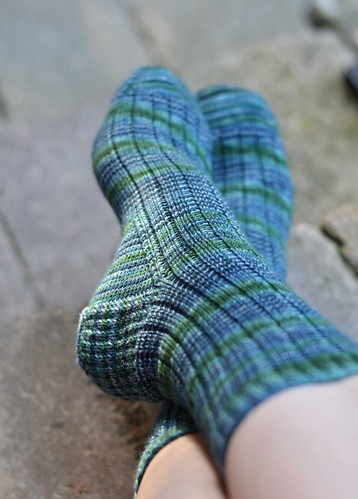 These ribbed socks, picked up from a partially-complete (meaning: barely started and then forgotten) project from a while ago, came off the needles a week ago and are now happily resting in the sock drawer waiting for fall. They lasted long enough as a handbag project to come along with me to at least a couple of flicks – I think that little ‘oopsie’ row there happened during X-Men. (I like it when my mistakes provide a historical record of my movie-going habits. I can tell you exactly which socks I was knitting during ‘The Avengers’ and ‘The Hobbit, Part 1 of 10 Zillion’, good times.) 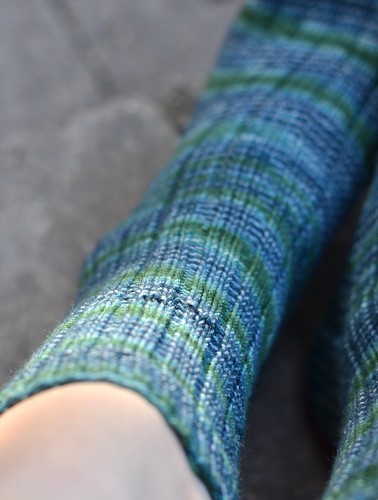 I let no dust gather on my 2.5mm needles and reached for the last set of Lorna’s Laces sock that I’ve had stashed since the 2009 Sock Summit. I bought a lot of yarn at that marketplace, but have always had a soft spot for the special release of Lorna’s Laces colours that I purchased there. The vampire tea party socks met their completion earlier this spring so it was time to complete the set and reach for the lovely ‘ghoul’s gala’ green colourway I bought alongside it. It has not disappointed. 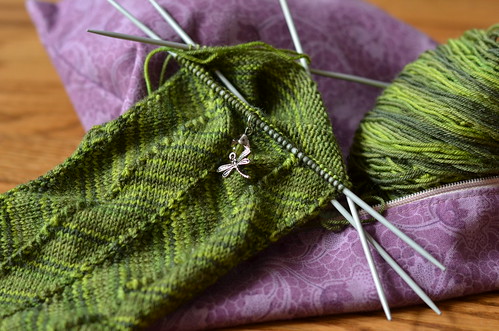 It’s so green and lovely and spring-like, and actually quite a subtle vareigated colourway for all the different shades of green it gets in there. Apparently this one was brought back from limited release land and is now a regular colourway in their line, called ‘ascot’. Green jaywalkers for all, I say! 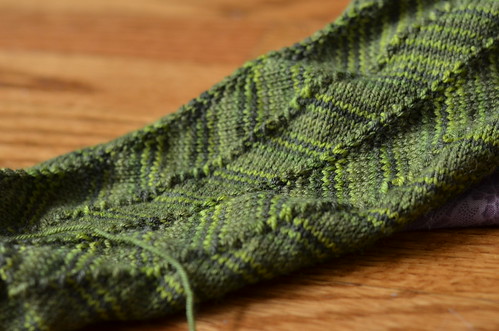 Of course, because I am me, I am also taking the opportunity of knitting on the 4th pair of from-stash socks in a row to think “hey, maybe I need to replenish some of that. I should buy more sock yarn to make up for the deficit, right?” (spoiler alert, if anyone were to accuse me of not having enough sock yarn left in the stash, um, I might also have a bridge to sell you.) So that’s probably a sign that my from-stash sock knitting jag is probably coming to a swift end. Better knit quickly.

Have an awesome weekend knitter friends!

← This time last week
Sometimes it really does happen →