So, I spent the first week of July in California (San Francisco area) and it was lovely and sunny and pleasant temperatures, and I was fully prepared to come back and report on how I made it to a yarn store even though I hadn’t originally thought I would (2 skeins of Madelinetosh sock followed me home from Article Pract in Oakland – I couldn’t very well buy only one and leave the other one all lonely, now could I?). 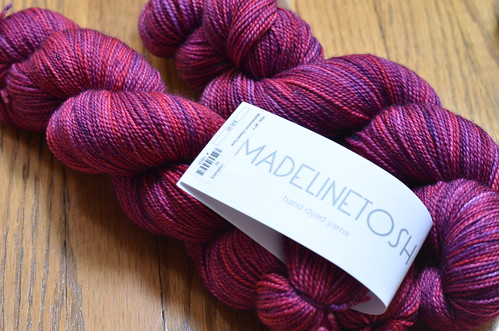 And I was also going to talk about how I got to see Lake Tahoe for a bit, and it’s just as pretty and alpine as everybody says (there are photos of it somewhere on a camera, um…somewhere…), and even with a cell phone camera it still looks like this: 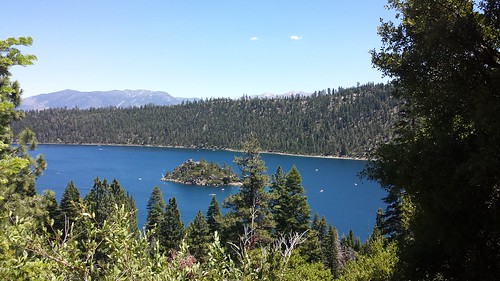 Then I was going to say that I even got some reading in (although it turns out that even if you read a tidy 50 pages a day for a week you will still only be halfway through The Luminaries, but it’s an engaging read so that’s not bad) which meant that most of the knitting I got done was my latest Lorna’s Laces jaywalkers. They’re done now though, and are pair #4 of this year’s sock drawer replenishment. (I may need to start doing more careful sorting of the sock drawer to make sure they all fit in there). 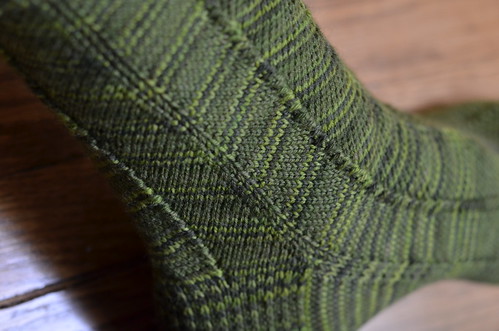 What actually happened is that I arrived home to discover, in my (and everyone else in the household’s) absence, that a toilet hose had gleefully disconnected itself and caused a whole bunch of damage. So then for a while I wasn’t actually living in my house, and here we are 2 weeks later and the repairs are hopefully actually starting soon.

So it’s been a rather disorienting couple of weeks, but I have at least had the knitting in hand which is a good thing, and maybe August won’t be so bad? Let’s hope.

I hope you have a good Monday, knitter friends!

← And then you get a shawl
Reset to stockinette →