As if this was ever a zero sum game

Today I finalized my travel plans for heading to Rhinebeck, aka the New York State Sheep and Wool Festival. It’s going to be fabulous, and not only do I get to visit the fairgrounds and eat delicious food and buy a bunch of yarn, I get to stay with a bunch of awesome knitter friends while I’m there. There is also every likelihood of crossing paths with almost every other knitter in the nearest 1000-mile radius, or so it often seems at the peak of Saturday afternoon at the fair! So many people to see, so many things to potentially buy. Busy weekend, but always awesome.

I usually come away from Rhinebeck with yarn for a couple of sweaters and a few pairs of socks. There’s plenty of that yarn that hasn’t been knitted yet, though, let’s face it – the sock yarn gets worked up pretty quickly but I have just a terrible (or perhaps not so terrible, you decide) habit of letting sweater quantities of yarn sit there until the right opportunity presents itself. Sometimes I know exactly what I want it to be but most of the time at Rhinebeck I just try to get a quantity of yarn that I like (and that I’m not likely to find as easily at home), and then decide later. 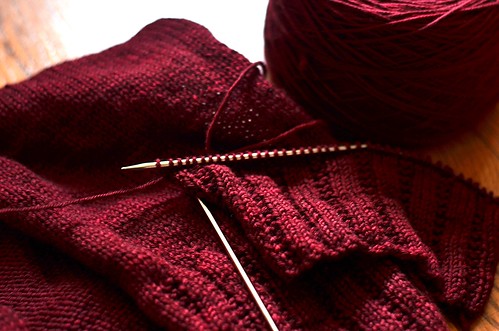 Over the last 3 years, I’ve purchased sweater amounts every single time from Miss Babs’ booth in the Yowza Whatta Skein light worsted weight superwash wool (so named for it’s big yardage). I love the colours, and 3 skeins will do me a sweater with room to spare, and it’s pretty easy to walk away with an armload of it without even thinking of it.

So I finally decided to get on that and knit myself up at least 1 sweater’s worth of it before heading to Rhinebeck anew this year. It’s a deep dark red called ‘Catherine’ that I’m knitting up into a 2nd Northside Pullover for me. I wore my original Northside pullover so much last year during the long winter that I have been wanting another one ever since. I’m hoping to finish it to wear at the festival this year as well, as a deadline to make sure I’ve got it ready to go in my wardrobe before the fall and winter season is in full force. (If it’s going to be another winter like last year, no sense in going in unprepared, right?)

What sweater(s?) are on your needles right now? If you’re in the northern hemisphere like me, you’ve got many months ahead to choose one to knit!