On the Needles: The Pre-Winter Crazy Edition

As the temperatures decline, the knitting impulse ramps up, so it’s no surprise that I have mentally cast on about twelve new things this week. In physical reality, though, I’ve already got plenty of projects on the needles, so I’m trying to keep the cast-on impulse as the motivation to finish the things I’ve already got going. After all, knitting on active projects is still the most reasonable route towards acquiring a finished project. (Or so I’ve heard). 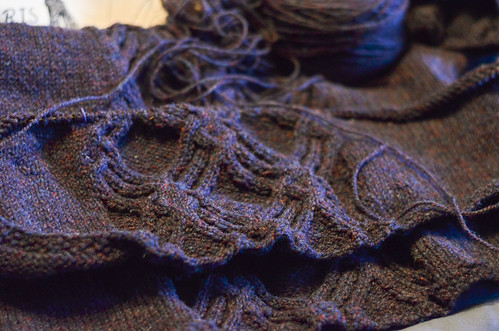 First up I’ve got the Portiere pullover that I started back over the Rhinebeck weekend in October. I got a pretty solid chunk of knitting done on this on my travels to the US and to the UK, between airport time and airplane time, but since then it’s been sitting idle while I’ve been turning my attention to some accessory knits. Self, you want to wear this pullover because it is currently cold outside. Get back to it. 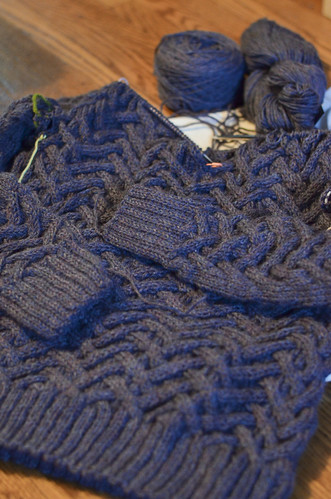 And speaking of self-pep-talks, I’ve remembered about some unfinished knits from last season – in particular the super warm and cabley Joist pullover , which I got about 85% done by April and then put down since, well, I suppose because it was April and I was less interested in knitting an all-over cabled pullover at that point. But now all I can think about is being warm, so this would be pretty sweet to get back in the mix. I also remembered that I started this one on Christmas Day as my Christmas cast-on, and I would really like to have it finished before Christmas Day rolls around again. Goal: set. 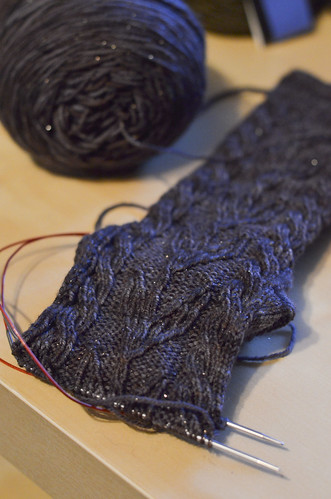 Finally, a week ago I pulled a long-stashed skein of Dream in Color Starry from the sock yarn stash and started a new pair of Viper Pilots, partly as a new pattern sample (I’m refreshing the pattern since it’s been on the pattern shelf for a while), and also partly because I can sadly only find one of the original pair, and what if I need to wear my Viper Pilots socks at a moment’s notice and only have one? I mean, that simply wouldn’t do.

I’m also suddenly aware, now that I take all of these out to look at them at once, that everything I’ve got going at the moment falls into a similar grey-purple colour scheme, so perhaps something non-grey/non-purple will be a wise selection soon. A bit of a colour change can do wonders for the knitting excitement, am I right?

It’s hard to believe November is already more than half over. With any luck it will expand to encompass all of these projects being finished. I live in hope.

What’s on your needles this week, knitter friends? Have a great weekend!