If it were any other sport

Are you a person who makes personal resolutions at the beginning of the year? I often am, this year included. (Being more frugal is up there, and to wit I have not purchased any yarn since Boxing Day, I’m holding up pretty well so far, thanks to ye olde stash.) If your resolutions involved any kind of new regimen which is now, 6 weeks into the year, starting to show signs of flagging, I humbly suggest knitting fitness as something to bring into your routine for a late winter boost.

A lot of us make it through winter with a pretty high productivity level. Knitting is a survival tactic both for the process and the results: we get warm things to wear outside in the cold, and we get a warm and colourful hobby to keep us busy inside when the outside world is the opposite of warm and colourful. If you’re the sort of knitter who also makes a lot of gifts during the winter season, your level of activity has probably given you some aches and strains at a few points, which is a good reminder to take knitting seriously as a physical activity. 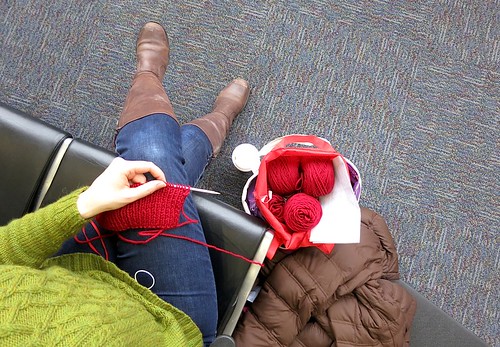 I am of course, not a medical professional, nor do I play one on television. If your knitting is actually causing you real pain, please consult a doctor. (I actually had to do this once after I developed tennis elbow from knitting too much. I adjusted my form a little bit and made sure to take breaks more frequently as a result, but my knitting was out for the count for a little while and I was less than thrilled.) I can, however, contribute some recommendations learned over ten years of pretty dedicated knitting.

1. Take breaks.
If you’re a person who can’t go more than fifteen minutes without checking your smartphone, you’ve got this one locked down, because you’re probably putting down your knitting to do that. But this can be harder to remind yourself to do if, say, you’ve got a weekend free of any scheduled responsibilities other than watching Netflix and knitting continuously while the next episode of whatever you’re watching gets queued up automatically. (Hypothetically speaking of course. I mean, maybe someone could end up rewatching the entire series of Gilmore Girls and X-Files back to back because they’re there, not that I would know of course ::coughcough:: )

The important thing is to give your hands a break on a frequent basis. I’ve seen recommendations to do this every 15 minutes on up to every 30-45 minutes. Put down your work, stand up, and let your circulation return to normal for a couple of minutes.

2. Stretch.
If we were talking about any other physical activity that gets repeated for at least an hour a day every day, there would be whole magazine articles (if not whole magazines full stop) devoted to helping you perform this activity with strength and endurance and without injury. But because it’s knitting we too often take it for granted as a passive leisure activity rather than than something that takes a continuous toll on our bodies.

So, when you’re taking those breaks, pause to stretch out your hands, arms, and shoulders. Knitting is almost a full-body experience, so while stretching and massaging your hands is important, don’t stop there. Craftsy has a good post on hand stretches, this blog post has some great focus on the forearm and wrist, and this excerpt from Pam Allen and Shannon Okey’s For Dummies book has a good set of stretches for both hand and shoulders. The wrist exercises on this Livestrong post are focussed on tennis elbow, but are equally good for knitting strain as well. 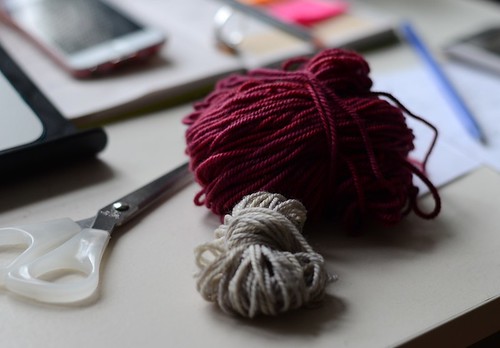 I’m a right-handed knitter as well as being right-handed generally. As a result I find that the arm muscles on my right side are stronger than my left side, but the right shoulder is weaker. This was something I discovered pretty acutely last year while I was working with a trainer at the gym on a weekly basis. As a commuter I joined the ranks of gym-goers because it was the only way I could make regular physical exercise happen during the week, and I started doing the trainer sessions to help me with strength training to support my running. I also discovered that other imbalances in my strength really were due to knitting, and as a result my trainer gave me exercises to focus on building strength one side at a time to try to correct it. Dumbell workouts are my friend now.

There was also a time when I wasn’t running and yoga was my dominant form of physical activity, and it helped me build a moderate amount of shoulder and arm strength that in turn helped me keep up several hours of daily knitting. If you’re a regular yoga practitioner you probably agree with this. While yoga isn’t as dominant in my current exercise routine, I do a few minutes of it after running to keep it in the mix. As a knitter, I think if you were to do even a simple routine a few times a week that included a couple of sun salutations, downward dog, triangle (ohhh that is my favourite for the shoulders), cow face pose (or at least the arms, with modification if you can’t reach all the way), and some kind of twist pose, you would be doing pretty darned well.

In other words, whatever your regular exercise routine is, if you think of it in part as cross training for your knitting, you’ll be well situated to keep doing both.

And, if you do sustain a knitting-related injury that is bad enough to need you to take time off, you have my utmost sympathies and I hope you are using the time to enjoy all those other hobbies like reading or shovelling popcorn into your face, that continuous knitting tends to get in the way of.

Stay fit, knitter friends! Until next time at least 😉

← When you knit things, they get knitted
Practically the same thing as being done →