You get there eventually

Just about every conversation I’ve had this week has included some version of, “February, am I right?” It’s the shortest month on the calendar but feels like the longest, especially if you happen to be experiencing one of the coldest Februaries on record for the past century like us poor slobs in Ontario. And we’ve got at least another month of cold (sweater season is not over by a long shot and I am having a wool renaissance of poring through my yarn stash), so even though we’re closer to spring than fall it’s a month that seems like forever. The west coast on the other hand are practically wearing bikinis because their winter has been so mild, and when I see photos of crocuses and green grass my brain actually does not know how to deal with this information. Wait…somewhere out there has green things?

Bridget and I were commiserating about this earlier this week when I went up to her shop for sweater photos, because it’s also the stage of winter when all of your unfinished projects seem like they won’t end. But then I realized that, wait a minute, not only is February almost over but so is that grey moss stitch thing I’ve had on the needles since Christmas. It didn’t feel real until I was actually just a couple of inches away from finishing the last piece, but you know, eventually grey moss stitch islands get done too.

Knitters, my Ossel dress has finally reached the blocking board. 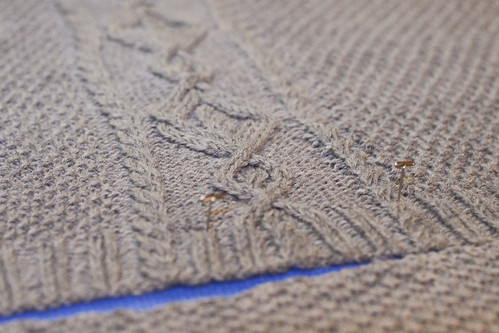 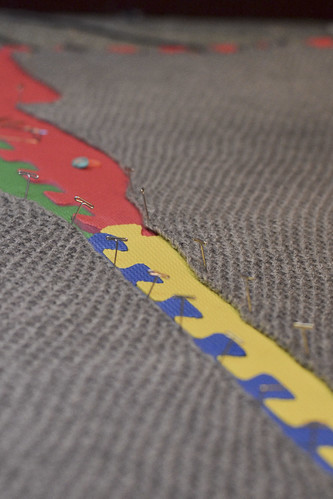 I will, of course, have quite a bit of finishing (mostly seams, long ones at that) still to do, but this is about 1750 yards of done-ness. I won’t lie that I am slightly nervous to confirm the fit once I put it on (I did all my measurements and so forth, but the proof is always in the final on-putting), but it’s pretty great to have the pieces done.

Getting photos of the finished thing will also be fun – guys, it might just be a rumour, but I heard the temperature’s going up to -2C next week. Break out the pina coladas and patio umbrellas!

I hope you’re getting some nice knitting time in this weekend – and a refreshing beverage (or two) of your choice. Happy Saturday!