A shawl, no reason

I don’t know about you, knitter friends, but I seem to have arrived at pre-spring state of mind where it has finally sunk in that the big projects I was working on for a few months over the winter are finally done. My knitting brain knows that there are other projects it wants to work on but can’t quite seem to remember which one I was going to work on next.

So, while I was figuring that out, I busted out a quick shawl. 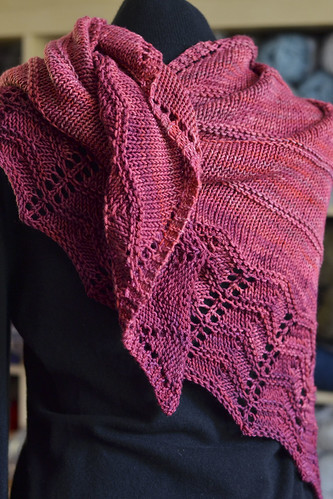 This is my Duke St. Shawl pattern, that I only ever knitted once for the original sample but always meant to go back and make another one, even bigger. Since I’ve also been taking long and longing glances at my yarn stash, I also felt pretty good grabbing a few skeins of worsted weight yarn that were not getting used any time soon and pressing them into immediate service. 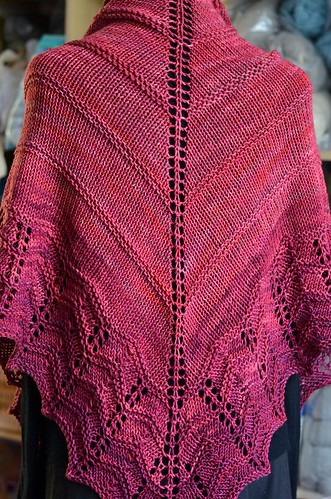 I used 4 skeins of Tanis Fiber Arts Green Label, in the garnet colourway which has always been one of my favourites of Tanis’ colours. (For those with the pattern, this involved adding an extra repeat of the ‘plain’ body section as well as the edge chart). The only hitch is that I didn’t acquire all of these skeins at the same time – at least two of them are old enough that they were made with the original garnet dye composition that has since changed, which means this shawl takes a time jump from about 3 years ago to…6 or 7? Yarn world, it’ll keep you guessing.

My only real attempt to manage this was to try to work the skeins in as similar an order as possible, so that the “most like” skein appeared next. It should stand to note that I could have alternated skeins every 2-4 rows throughout, which would have produced a more consistent appearance overall…but I did not, I simply went forth and knitted. The advantage of a triangular shawl worked this way is that any difference in yarn colour will appear more like stripes than pooled sections of colour variation, so it’s an easier risk to take on. 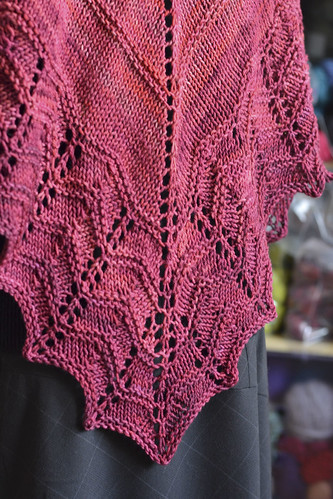 The result almost turned out to have an almost ombre effect, grading from light to dark towards the outside edge. I like it. I even took the time to pin out the edges into lace points during blocking to give it a good finishing touch. I’ll be honest, I don’t actually know if I’ll wear this shawl or simply save it to give away as a gift some time in the future, but knocking 4 skeins out of the stash and into a finished object is darned satisfying.

I’m working away on finishing a new spring pullover design, but I think I’ll be looking around for another stash project as well, before too long!

← Changing it up
Drastic measures →