There’s a funny thing that happens in blogging world, probably in many different areas of the DIY/crafting/making/creative spheres, which is that we have a tendency to focus on completed projects and attractive successes more so than the yucky middle areas or failures. I don’t think this is necessarily a conscious decision, either, and it happens to the best of us, but when left unchecked for a while it can all to easily start to appear as though we’re all producing perfectly completed things all the time and never worry about mistakes any more. I can tell you that experienced knitters/designers/creatives of all stripes would probably respond to that with a loud HAH BLOODY HAH, and then proceed to tell you about their many fuck ups. Experienced knitters don’t stop making mistakes, we just do them more rapidly and keep finding new ones.

So, let me take you back to one of these mistake times, a little less than a month ago when I was finishing up my Ossel dress (which has by no means been retired for the season yet, true to form we have snow predicted for Easter Sunday just for kicks), I had a situation arise that I discovered during the blocking phase. 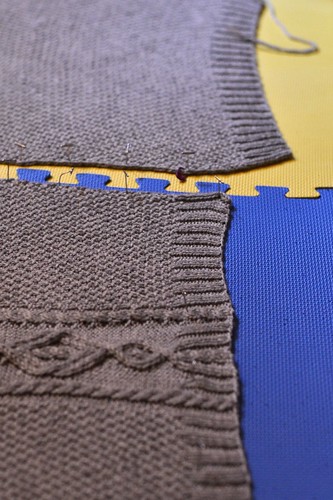 This dress is worked in pieces from the bottom up, and once I finished the pieces I washed them and then pinned them all out to block and dry. It was then that I discovered that I had knitted the back piece a full two inches longer than the front. I don’t have an exact explanation for why this happened, just that it is indeed the kind of thing that can happen, and when your pieces are as long as those for a dress, it can be more challenging to measure your pieces against each other with the right amount of accuracy and make sure both are the length you want. This is also an increased risk when you are working in pieces from the bottom up as opposed to top-down/seamless – but then also because I worked this in pieces, there is the upside of being able to address the problem on only one piece, not the entire sweater. (Every technique has upsides and downsides, I am here to reassure you).

The extra 2 ins in length was in the skirt section (i.e. the widest half at the bottom). There are a few different ways you can go about fixing this, depending on your level of skill/patience/interest:

1. Rip back the piece to the skirt, including ripping out 2 ins of extra length, then re-knit the shaping decreases and increases for the body and everything all up to the shoulders.

2. Rip back the piece just enough to remove the first 2 inches from the body, then re-knit from the armholes up and say to hell with any of the shaping increases and decreases matching up.

3. Turn your attention to the front piece instead, making it 2 inches longer in order to match the back.

4. Ignore the mistake and just seam it up as best you can anyway, accepting that the back is going to be a little bit bunchy from the extra fabric.

I did none of these things. I wanted the extra length gone from the back, not added to the front, but I didn’t want to spend another week or more re-knitting. I went for Door #5.

Let me also pause for a moment and say that I am a person who is normally pretty free with my encouragements about knitting techniques – I really believe that most things in knitting seem much much harder than they are, and a lot of the time just plowing ahead and learning the New Thing will get you past the hesitation and you’ll be fine. I still think this is a useful approach most of the time. However, this is not one of those times. This is a Break Glass Emergency move. We are playing for all the marbles with this move, and it is not for the faint of heart.

Reader, I got my scissors, and I cut that extra fabric out of the knitting. Yes, yes I did. 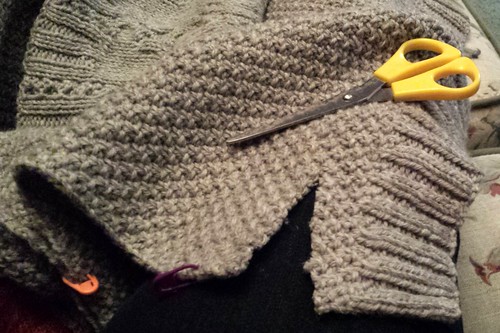 Now, I am a big fan of cutting my knitting when it properly applies, in other words I really enjoy cutting steeks. Steeks, though, are planned well in advance and have a normal sequence of steps involved, and they make vertical cuts not horizontal ones. Cutting across your knitting horizontally is riskier, and is awkward when you are cutting off the bottom of something because it’s harder to unravel “up”. Most knitting wants to unravel “down”, or possibly a little bit sideways if it’s going to unravel at all.

So, in making this cut I had to be pretty precise and cut exactly where I wanted to to be, and because it was moss stitch I had to pay close attention to the cutting line. (Also, I was doing this in the basement TV room, so no, it really wasn’t the most ideal lighting ever, and also it was the weekend so I’m pretty sure I had had at least one cocktail if not two, already. HI, ISN’T THIS FUN? I’m such a good role model, kids.) I’d never done anything like this before, but I’d heard of it done before, and the knitting part of my brain is home to most of my confidence, so I just went for it. 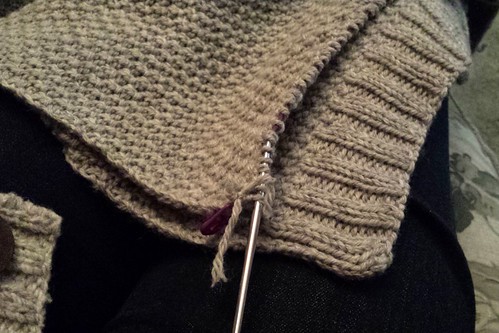 Once I had the cut made where I wanted it, I put the stitches back on the needles as quickly and carefully as possible (removing more bits of cut-yarn fuzz along the way). You can see some knotted bits at the end where I secured some of the cut ends at the sides. It’s not pretty but it’s fine, because the seaming at the end turns all that crud to the inside of your work not the outside.

From this point forward it was actually pretty smooth sailing. All I had to do was re-knit (“downwards” direction) the ribbing at the bottom hem, and we were good to go. Actually, having the ribbing made it easier than it might have been otherwise because trying to match patterns would have been more challenging when picking up and going in the other direction. 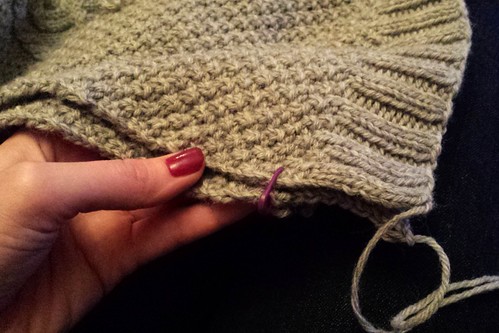 Then, I continued with seaming up the dress and it was all fine after that. The only real disadvantage was that now I had the bottom of my skirt freshly knitted and bound-off and I have admittedly still not re-blocked it, so the back hem is going to be a little bunchy until I finally wash it again. This is something I can live with.

This was a high-risk, high-reward fix. If it had failed, my recourse at that point would have been to re-knit the entire piece over again. Luckily that didn’t happen, but I do take some comfort in that fact. I don’t know how many material hobbies exist that would allow you to remake the same item all over again, with the exact same materials, in order to correct a mistake, but I am guessing it is pretty few. Unless your knitted item has accidentally fallen through a shredder, it doesn’t actually matter what the mistake is. You can knit it again. (Of course we don’t usually want to do that, but it’s a good safety net to have).

Have you had big time mistake-fixes recently in your own knitting life? I hope they turned out well in the end.

← A shawl, no reason
Because why not →