Not quite done yet

So, about a week ago I finished the Charlotte St. Cowl I was working on, a larger version of my original pattern. Or at least I thought I was finished.

It looks lovely and after blocking it’s turned out light and lofty and just perfect for the BFL wool yarn (100% wool is airier and holds up a little more structure than superwash wool does). It was totally done. 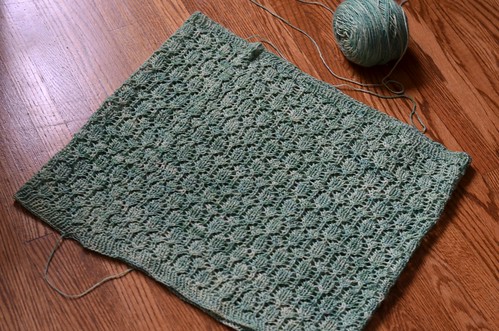 But when I slipped it on it just wasn’t quite as tall and snuggly as I’d wanted it to be, and since I’ve got more than half a ball of yarn left there’s really no reason not to keep knitting it more. I think I stopped knitting when I started to get tired of it, rather than when it needed to be stopped, and since I’ve still got more yarn I decided to pull out the last bit of ribbing, and pick up the pattern where I left off. 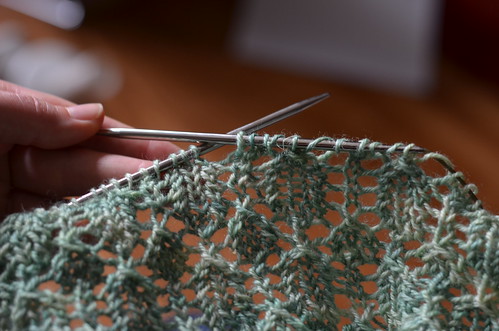 Using 100% wool means you can be a little more cavalier about picking up live stitches in a row of lace knitting (wool sticks to itself and doesn’t want to drop down as quickly as superwash wool or some other fibres might), but all the same I decided not to be too fussy about picking them all up in the right direction and just got them all on the needles. Some of the stitches got picked up from the front and others from the back (this affects your stitch orientation), so then when I worked the first round after picking up, I also had to go and re-orient all the stitches the right way around on the needle. Fussy, but worth it! It will all sit nicely in the end.

This weekend I will be heading out on some travels west – visiting family in Edmonton and then a few days of leisure in Vancouver – so this will be coming along with me for travel knitting. I’ll also bring the current pair of socks on the needles, and a new sweater project to start on. Hopefully that’ll be enough for a week!

Have a great weekend, blog friends!

← We are go for blanket
Midsummer sock yarn adventures →