Earlier this summer I cast on for the Liberty blanket, which is a big gorgeous project that I’ve wanted to make for years. You would think that would really be enough in the Large Projects With Indefinite Timelines category, and I really did think it would be too. But then I went on vacation with my sister at the end of July, and for a travel project she brought with her a few skeins of sock yarn that she has started crocheting into granny squares. She doesn’t knit as much as she used to so she’s rounded up her sock yarn and has decided it’s going to be an afghan instead.

So that seemed sort of neat and I was all willing to be impervious to the charms of cute and tidy little granny squares in pretty little bits of sock yarn. But then she kept pointing out that I have a whole bunch of sock yarn remnants in my stash that aren’t getting used and I could just go ahead and start making them into squares any time I wanted. And I have never crocheted a single complete project in my life (though I do know how to wield a crochet hook for knitting support purposes like steek reinforcement, single chain edgings, and so forth), but I do know how to make a basic granny square.

And that dear blog friends, is the story of how last week while I was on the couch with a cold, I started turning this: 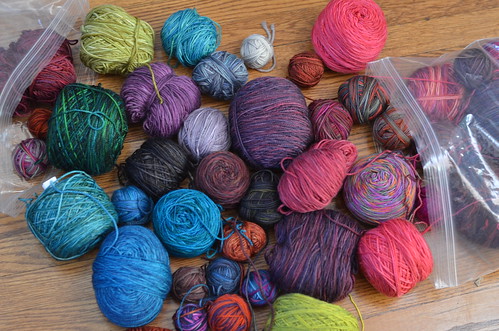 So far this is pretty fun. I’ve done more than 30 so far and it hasn’t gotten boring yet (though I know from anecdotal evidence that it will reach that point eventually). If anything, the sheer choice of sock yarn remnants is making it a pretty impervious project to boredom, because there are so many colour combinations to choose from. As long as I don’t do more than 2 or 3 in a row with the same colour combination, it’s all good. 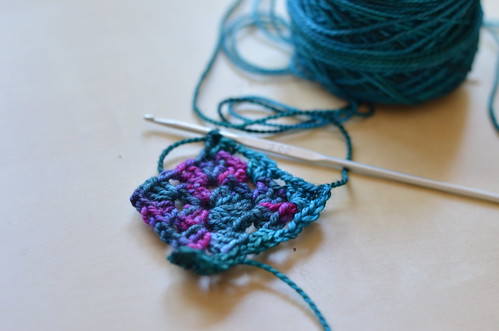 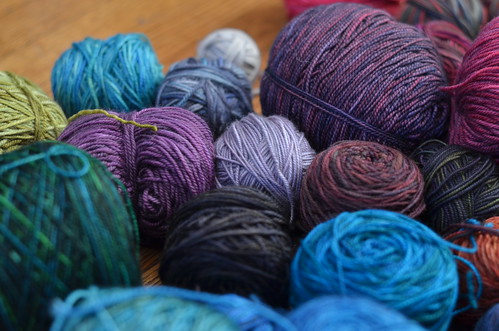 My sock yarn remnants bin holds everything that is less than about 3/4 of a skein (the leftovers from not just socks but fingerless mitts, sweaters, and shawls), so there are some more plentiful bits in there alongside small remnants of 10g or less. It is pretty great to give these little small bits of yarn one last hurrah – congratulations guys! You made it! You’re going to get one last final project after so much waiting around! Great work everyone! I like the small multicoloured remnants a lot.

This will definitely be a big project with a long timeline on it, but it’ll be worth it in the end. A nice light colourful afghan is always a good idea, right? Right.

Happy weekend, blog friends! I hope you’ve got a great project to spend time with.