Blast from the past

This week I’ve been spending some time sorting out some small ‘invisible corners‘ in my bookshelves, pulling out books that I don’t need or use anymore, and ditching papers that don’t need to stick around. There are a couple of shelves of knitting stuff in this area that I haven’t touched in years.

Friends, I found treasures. Well, not all of it was treasure. I cleared out a LOT of paper. Did I really think I needed to print out all those patterns I found on the internet nine years ago? Did I think I was never going to be able to access the internet again and I would need several dozen backup patterns in hard copy, in different styles and project types? Did I really think I needed to keep every single marked-up pattern copy I was finished with, even when I did still have the original magazine or PDF or book? I am pretty sure a lot of us did this back in the deep dark ages of 2005, oh man. 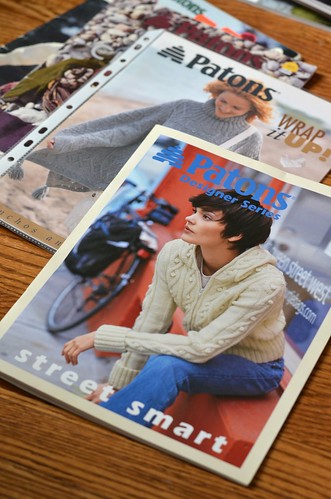 I discovered some old (by which I mean, 10 or so years old – practically ancient) Patons booklets, and oh man I remember these. The Street Smart booklet was a big thing. So many people were knitting the Must Have Cardigan, and I remember when the Yarn Harlot knitted it, so many people were scrambling to knit it and going on desperate searches for the pattern booklet because at that time (2008 by that point) the digital revolution was still in progress and PDF downloads were not quite the norm yet. Brooklyn Tweed knitted the Urban Aran pullover as a cardigan and then everyone started doing the same thing. Oh, the memories. I also still really want to knit the Cabled Hoodie from the cover of that booklet, just like I did when I bought it. (It turns out now that those patterns are all available for free downloads from the publisher, so nobody needs to get into LYS fights over the last Street Smart booklet anymore. We live in crazy times.)

Also, part of me still wants to knit that Blanket Poncho on the cover of that other booklet. Remember ponchos? Have we circled back around to ponchos? Anyway I remember once seeing a knitter in the wild in an LYS wearing that poncho and was a little starstruck for a few minutes. It’s hard to let go of those patterns you’ve been coveting.

I also still had a couple of dozen issues of Interweave Knits magazine, from about 2005-2008. There was a while there that I subscribed to it, before I had a couple of years of living at a different address every year and stopped subscribing to things. Then after that it turned out I preferred to just pay to download individual patterns when I wanted them (because that became a reality a few years later), and then I stopped subscribing. I’m so glad I did subscribe for a while there, because now I get to leaf through the back issues I do have. There are so many modern classic patterns that came out of these issues. So many of us salivated over the Ivy League Vest and Venezia Pullover (well, I definitely did – I’m thinking about doing a 2nd Venezia sometime in the future now). I remember all the knitting podcast chatter and blog chatter about things like the Tilted Duster, the Lotus Blossom Tank, the Cobblestone Pullover, the Sunrise Circle Jacket. So many of us knitted Swallowtail shawls, and I remember that was the first time I did nupps. (The first row of them didn’t go so well. The next few rows were better). 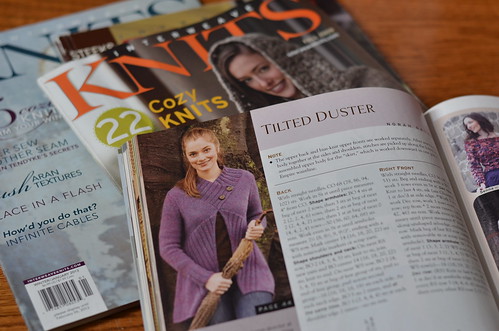 It’s also pretty amazing how much change has happened in knitting world in the last ten years or less. I know sometimes we talk about the ‘before times’ in knitting as though everything was different fifty years ago, but friends, so many things were also pretty different eight years ago. Ravelry was just starting up, Twist Collective didn’t exist yet, Knitty was still pretty new, and it’s boggling how many yarns I knit with on a regular basis that either didn’t exist yet at that time or were very new on the scene. IPads and tablets didn’t exist yet. Smartphones were like crazy talk, for the super tech savvy people. Buying yarn online still felt like a new awesome thing to be able to do.

I’m not entirely sure what the moral of all of this is, but it’s not going to be me saying that everything was so much better/so much worse in the past than it is now, because neither of those things are entirely true and I have no patience for generalizations like that. Some things are better, some things are more challenging, and some things are just plain different. But I do think that if you ever have moments – particularly if you are a new knitter just starting out in this brave new digitally flattened knitting world, dear God I have no idea what that feels like – of feeling like there is so much out there, more than you will ever get the hang of, it’s okay. There is so much out there, there always will be so many things to knit and so much to learn and choose from. I’m pretty sure a lot of us still felt that way before the digital knitting world exploded the way it did. And we don’t know what changes will happen in another nine or ten years.

It’s okay to go towards the projects and yarns and skills you love, and not towards others. Do the knitting you enjoy. You get to choose, and isn’t that great?

May you have a knitting-filled weekend ahead! I’m just going to flip through a few of these pages one more time. And, uh, queue up a few more things on Ravelry. Until next time!

← Anything goes season
It might as well have candy filling →