Weak in the face of wool

Despite having finished 2 projects this month I still have no shortage of Works In Progress on the needles, so I’ve been trying to stick to the willpower as much as possible and not cast on twelve new sweaters all at once just because it’s September. But a girl can only hold out for so long. I didn’t cast on twelve new sweaters, just one, which I feel shows just incredible restraint. 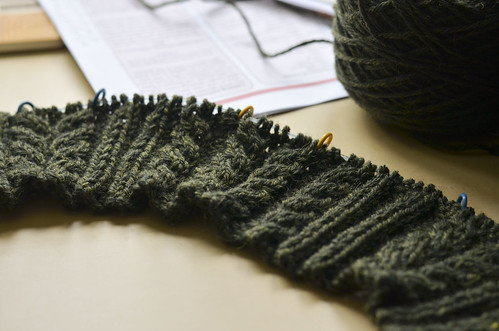 I’ve started a new Jurisfiction cardigan for myself (the original sweater now lives with the friend who modelled it for me), which I’ve wanted to do for ages. For the second go around I’m planning to modify it by adding a hood and making it a zipped cardi instead of a buttoned one. And provided it all goes well I’ll update the pattern instructions with the same modifications. I may be playing a game of chicken with the yarn, since I thought I had one more skein than I do – but hopefully that bridge will be crossable when/if I get there.

A girl can’t have too many cabled cardigans, I feel, and I’ve got rather a shortage of hooded ones. To the cables! Have a great weekend, knitters!

← Finished Project: Rocaille Socks
If you want to up your knitting game →