Greetings, knitter friends! I am writing this on the flip side of my move, which went pretty well as moves go, and am now adjusting to a new pace of life in the ‘big city’ back in Toronto. It’s been several years since I lived in Toronto itself, and I’m remembering how it is both amazing (so many things to do! friends to see!) and chaotic (transit on rush hour is never not terrible, as far as I can tell). Although my knitting time and leisure time in general has taken a bit of a hit the last few weeks, I haven’t neglected these things altogether and now I look forward to ramping back up towards a “normal” pace again, now that more boxes are unpacked. 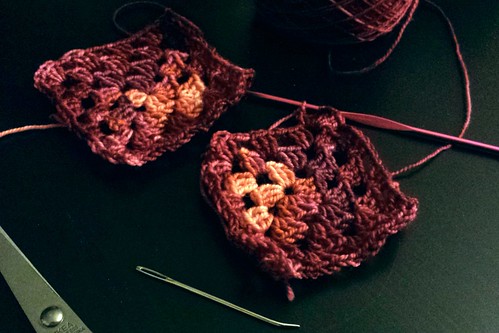 I have been finding the crochet granny squares project very enjoyable over the last few weeks, since a few minutes to do a little square is usually manageable and it still allows for a sense of accomplishment. This project is coming along well, I think, and I’m at about 160 squares total, about half of which are complete with the border colour and half are just the colourful centre square part. So that puts me closer to the halfway point, which is exciting!

I am, however, getting to the point where the smaller amounts of very multi-coloured sock yarn leftovers are running out (compared to the larger amounts of semi-solids), and I have decided to start using those more colourful bits as the smaller, centre colour rather than the second, larger section, as much as possible. 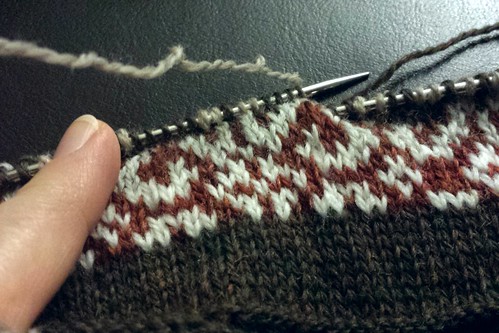 In the midst of everything I have also been turning out a few rounds on the Venezia pullover, which will hopefully see more action once there is a bit less IKEA furniture assembly in the near future. This had a bit of a hiccup several days after I cast on, when I realized that the (300 or so stitches) circular round had been twisted at the join, and I had to pull out the first inch or so of progress and re-do it. Hopefully that means I’ve gotten the worst knitting hurdle out of the way (knock on wood)! It’s been a while since I’ve done a big colour-work project and it’s good to turn to it in the rotation.

There are, of course, other Works In Progress that are begging for their turn, and new designs to be created, but I keep promising them all that everybody will get their turn. I’m going to just give in to whatever my knitting brain wants at the time.

Happy Wednesday, knitters! I hope you have an enticing project waiting for you this evening.