Progress, of a kind

Having made no secret of my crankiness over a relatively slow bit of knitting progress in the last couple of months (understandable, given a move and a new job, but still, the crankiness), I sat down last night to finally turn some attention to a sweater project I haven’t knitted a single stitch on in the last 2 months. It’s my own Jurisfiction cardigan pattern, and I was going to knit a new version for me with a few modifications to keep it interesting. I left this off with a finished back piece and a sleeve, which is pretty great progress for a sweater – more than a third of the way through. 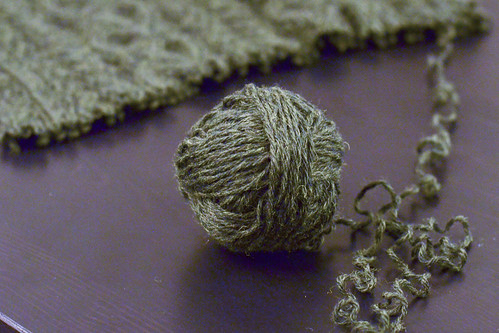 On the other hand, pulling out of the project bag in the harsh light of day 2 months later, tugging at it and examining, I realized that the back really had come out a bit smaller than I’d prefer – which might be manageable with the right blocking. Except that I’d wanted this to be a looser sweater anyway, so if the back is looking a bit small then now is the time to deal with reality.

And so, dear reader, I ripped it out. 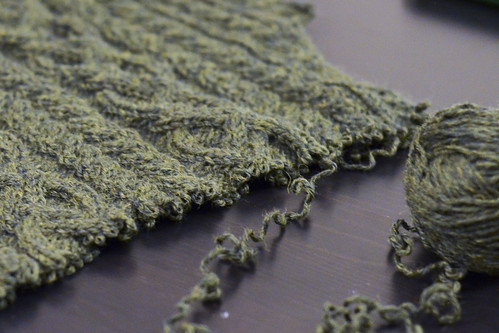 I’ve been here before. Most memorably, I got most of the way through the back of the Gwendolyn cardigan to discover the same problem needed a ripping-out and it all ended up coming together just fine in the end. And in this case I do still have the one finished sleeve which is totally fine. The ripping out part, though, the ripping out part sucks and it’s even more mollifying to have that trip-up happen when it’s your own pattern from your own brain and come on Glenna, get it together.

It was the right move, though. I’d rather move towards the holidays with a clearer slate, so it is still progress of a kind.

My next move, once I finish the gift socks that are almost done, is going to be to find a super fun cabled hat pattern, and knit that sucker over the holidays, and that will be small and absorbing and finishable, and then I can move on with the rest of the big projects hanging around. Yes, that will be good. I’ve been eyeing the Favorki pattern (these are all Ravelry links), the Cote-Nord cap (which several of my knitter friends have made with big pom-poms on top, and I have only so much willpower to resist that),  the Cassidy cap that I’ve been wanting to knit for years, and the Father Cables hat that is a new one and I just came across. Cabled hat daydreams will sustain me.

If you’ve got ripping out to do in your own projects, I salute you! It’s hard to do but usually worth it in the end – even if it sucks while you’re doing it.

I hope your Friday is a good one! Until next time.