Either very behind or very ahead

Knitter friends, how is your post-New Year knitting world taking shape? Have you been filled with the start-itis impulse to cast on everything you were holding off on before gift-knitting season took over? Or perhaps you are in the doldrums of the dark and cold of January and are just plain looking for something new to hold your interest.

This last one is my usual situation for this time of year. I routinely forget that January is just The Worst in may ways – it’s the coldest, the darkest, and seemingly the longest month of the year, and with no extended holiday break to look forward to at the end of it. The reward for getting through January is February, which let’s face it is also pretty brisk around here. The only way out is through, though, so it helps to have some cheerful knitting to look at in the evenings! 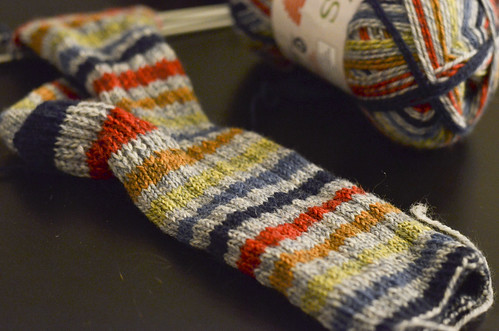 I find myself in a very similar position as I was in before the holidays, actually, in the sense that I am looking for the reward of finishing something. Despite casting off a few gift projects in December I still have about half a dozen Works In Progress to ponder, so my January goal is just to finish at least one thing, or at the very least make good progress in that area.

I am also trying to sow some productive seeds for the year ahead, and try to get in some gift knitting throughout the year. It’s the kind of thing prepared knitters always say they do, and I always think heck yes that would be super awesome. So I’m trying that out and am going to make 2016 the year of knitting socks for other people throughout the year (among other things – I have other 2016 goals, never fear). I’m starting out with this pair of ribbed socks in Patons Kroy, a nostalgic favourite of mine that has recently taken on new life with some updated stripey colours. The first fingering-weight pair of socks I ever knitted was in Patons Kroy and it is still going strong in my sock drawer. 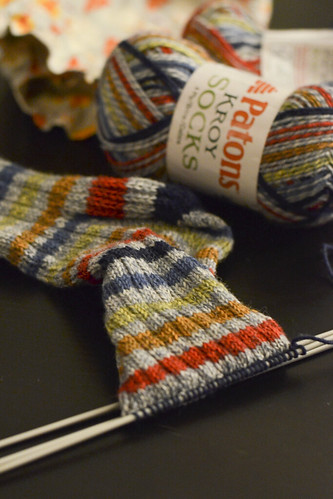 This particular pair started out with a very strong showing as movie theatre knitting at the beginning of the month (took me through Spotlight and Star Wars: The Force Awakens, both fabulous), and now it’s transitioned to being a handbag project that I can pick up in transit whenever. Seeing the new colour come up in the stripe progression is pretty great.

What’s keeping your knitting needles busy this week? I hope it’s something you’re enjoying! Until next time.

← So you’ve discovered sweater knitting
Getting it done →