And sometimes you find that missing lipstick

Since the holidays I’ve been having a mild existential struggle with my knitting, in the sense that most of my projects are large enough that I can’t just finish them and clear the decks and move on to something new, even though my brain definitely wants to move on to new things. I had actually planned out a few more hat projects and just never got to them, plus there’s been sweater designs swirling around in my head for a little while and it turns out that those things don’t actually design themselves. (I’ve tried that option just to make sure.) 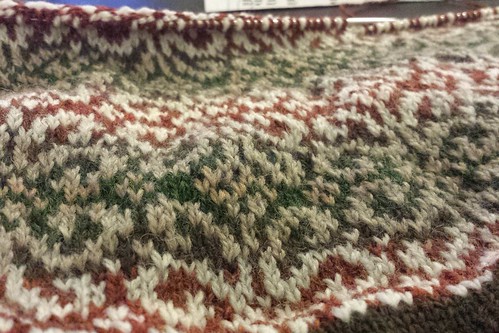 All this to say – I continually have to remind myself that no knitting work happens without making time for it, so those WIPs aren’t going to finish themselves and new ideas won’t miraculously put themselves on the needles. This week I’ve been making progress on the first part of that two-step plan by pulling out the Venezia pullover project that I have, embarrassingly, not touched since some time in December. I brought it home with me over the holidays but never ended up working on it, and now here we are and it’s February. 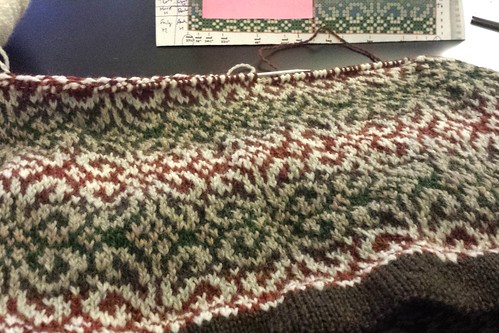 And indeed, it turns out another bonus of picking up a project after a couple of months is that you just might solve other mysteries along the way. Also since the Christmas holidays, coincidentally, I’ve been trying to find a lipstick I bought when out at the mall on Boxing Day – which isn’t that big of a deal, I suppose, except that when you spend several minutes choosing the one you want and then standing in the long line to pay for it, well, you sort of plan to actually get to use said lipstick afterwards.

It would seem that my spontaneous brain considers big colour-work knitting projects a secure hiding spot, though, which is now something that I know about myself! Good stuff, knitting brain, I guess you’re looking out for me when I least expect it.

This has been your unsolicited check-in on the crazy world of juggling many knitting projects in progress. I hope you have some good knitting time this evening, friends! Happy Wednesday.