My knitting blog friends, I do owe you a bit of catch up.

One of the first things I’d be remiss in mentioning is that a pattern I had the privilege of designing this past year is now out in the world – I’m pleased to show you Francoise, a vest pattern which is one of three in Julie Asselin‘s new Nurtured Collection. It’s a lovely set of patterns and I may have to go and knit the other 2 patterns in it post-haste. Thank you Julie for having such gorgeous yarn to work with! The Nurtured yarn line is a beautiful textured 100% wool, which is my favourite kind of yarn.

My knitting life has continued apace in the last few weeks, but my time on the internet sadly has not, and here we are with more knitting reporting to share and little to show for it. Rectifying this starts now! 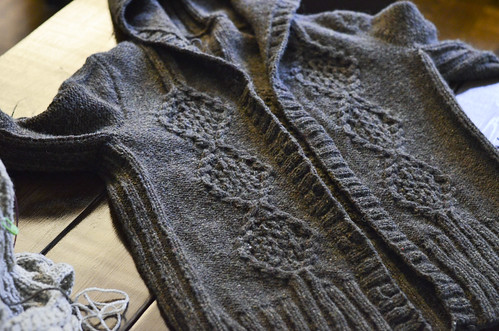 In other catch up news, last month I was frantically knitting away on my Rhinebeck sweater project – my own Bonspiel cardigan for myself (the sample size is always slightly smaller than what I would choose for me, so hey, knitting a second one is not the worst thing ever), and I did in fact finish it just in time for Rhinebeck! There was a lot of knitting while travelling (on planes and while riding in cars), and up to the last evening I was finishing seams and knitting the button-band. Let me tell you how much you can actually get done in a short period of time once you put your mind to it (or have a self-imposed deadline attached to it). 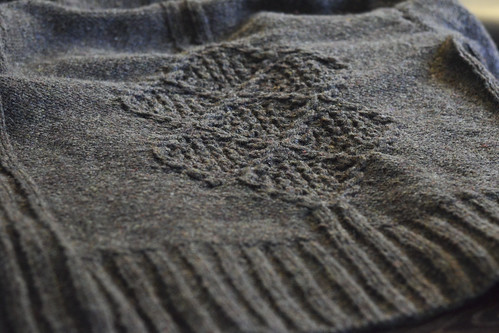 I finished it, wore it on the Saturday at the fair (even though it was a little too warm for it – but hey, we knitters are a stubborn group and so I wasn’t alone), and was pleased to have done it to deadline.

In my haste, however, I failed to actually properly check my height on the hood before finishing it up. It came out a touch shorter than was really needed. We’re talking like, an inch – enough to make a difference but also small enough that I started questioning whether I really did want to care about it deeply. The hood was still a hood either way. 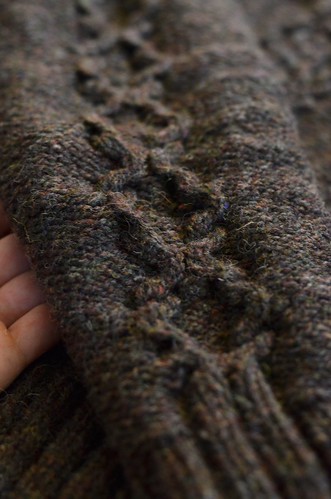 I got home and decided that actually I did care about having hood that was functionally comfortable and not just a decorative accent, so. I did the thing – I ripped out the button-band (this part is exactly as aggravating and fiddly as you think it is), pulled out the top of the hood, knitted an extra inch in length, worked up a new button-band, and re-blocked the whole dang thing. 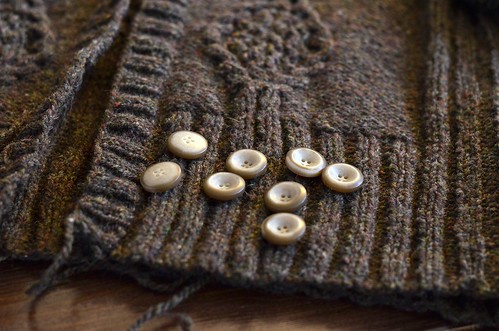 Then, for reasons I really have no explanation for, I let it sit on my coffee table for about 3 full weeks before finally sewing the buttons back on. I don’t know why this a thing I do, but it is so easy for me to just delay that one final finishing tactic as long as possible. Perhaps some of you out there do this too. I think my brain gets done with the project long before then and has already moved on. “Oh, you’re still not done those buttons? Too bad, I’m already on the next sweater you need to make, guess you’ll have to sew those suckers on without me. Laters!” 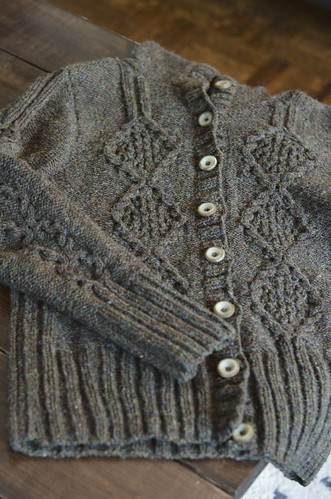 Long story short, I finally lassooed that part of brain back into action, sewed those danged buttons on, and now I have my sweater back. In the nick of time, too, because the almost-winter chill has finally settled in around these parts.

In the mean time I’ve been knitting away on another knitted wooly cardigan which I’ll be sure and show you next time. In fact, I’m giving serious consideration to knitting nothing but 100% wool cardigans this winter. We’ll see how that plan goes!

Have a lovely Friday my knitting friends, and I hope your weekend has some relaxing knitting time in it.

← Around and around we go
My answer is wool and cables →