My answer is wool and cables

Knitting friends, I don’t mind saying that November has been a little bit crazypants. Perhaps even more than a bit crazypants. Crazytrousers, even. My day job is non-stop busy during the day, the real world feels less than reassuring, and I’m starting to do a mental holiday count down towards the holidays. (I have not done this same practical count down in terms of what holiday knitting remains un-knitted, but I don’t see why that level of rationality is required at this juncture, so, moving right along, la la la!)

Anyhow, my answer, as in so many knitting times, is more wool and more cables. On November 1st, right at the top of the month, I cast on this baby right here. 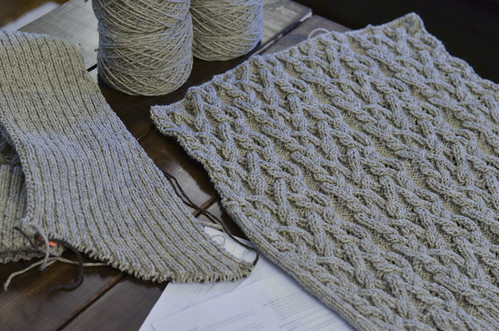 This is the Exeter cardigan by Michelle Wang, from a Wool People volume a couple of years ago. A knitter friend (hi Bridget!) made this a couple of winters ago for herself – one of those winters that basically made us Ontarians cry frozen tears from January straight until March – and I’ve had the materials all ready to go for this for about that same period of time. On the heels of finishing up my Bonspiel cardigan, I decided more wooly cables was the right answer for me on an existential level. There is nothing quite so satisfying as casting on for a new sweater. 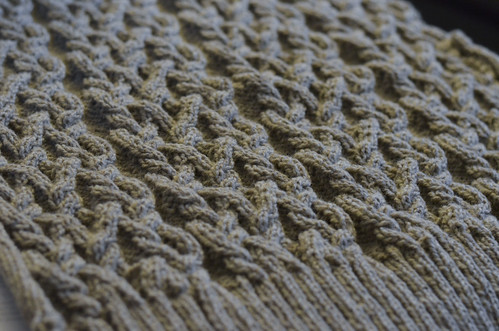 The original pattern calls for Brooklyn Tweed Shelter, which is a delightful yarn that I have used and enjoyed in previous knitting times. For my price point on this particular knit, I decided to grab an armload of Briggs & Little Heritage. It’s one of my favourite yarns, very wooly and versatile. It knits up a little heavier than the Shelter does, so I’m doing the trick of knitting a smaller size as written to get the size that I want, and based on how the back piece has turned out, I feel good about that choice so far.

I may actually knit nothing but Briggs & Little cabled sweaters all winter. Or at the very least, fantasize about doing that. It’s important to have a rich fantasy life in these dark times. (Literally dark, since we’re less than a month away from the winter solstice, too.) I know wool yarns can be subjects of strong opinions, and plenty of folks (you included perhaps) shy away from the sheepy 100% wool because of how it feels, or because of the occasional bit of straw that gets left in the fiber before it’s spun up. 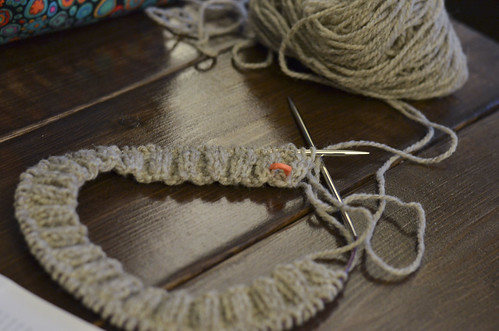 For me, though, I always itch to come back to this kind of yarn in the winter, it feels very solid and comforting and there’s nothing like it for the structural stitches like cables.

So far I’ve knitted the back, one front, and have started in on the second front piece. It’s meant to be an oversized style sweater, which means more knitting time than I normally would spend on a sweater with only 1-2 ins of positive ease, but it’s good to have something to just plow away at.

I’m hoping to get through both fronts before my brain drags me to a new cast-on of some kind. It’s a lot of staring at grey cables in the mean time, but they’re going to be warm grey cables and that’s the important thing.

I hope you are having some solid knitting fantasy time of your own, knitting friends. A fine Tuesday evening to you all!

← Catching up, part 2
A quick swatch to take the edge off →