Finishing a sweater, with time to spare to wear it in the current winter season, is a pretty awesome thing, my pals. I cast off this guy a couple of days ago and after a wash and generous blocking/drying time (bulky wool does take its time to dry), it was ready for the final step of putting on the buttons. 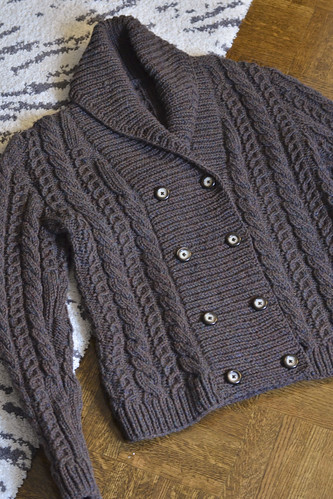 This has been an enjoyable knit, thanks to the memorizable cable panels and the relative speedy-ness of the bulky yarn. I don’t knit sweaters in bulky yarn as often (they tend to see less wear than other yarn weights, since they are most wear-able on the very coldest of days), but damn they sure are satisfying to knit. Can’t wait to wear it out in the world! I suspect this will come in handy as a jacket substitute on cooler days that aren’t below freezing, as well as a solid layer when it’s the -10C and colder.

The pattern is Smoky Lake from Twist Collective, and I knit it as written with one exception – I changed the direction of the smaller cable to twist to the right, instead of to the left like the larger one does. Just to lend a bit of directional balance to the overall knitted fabric. 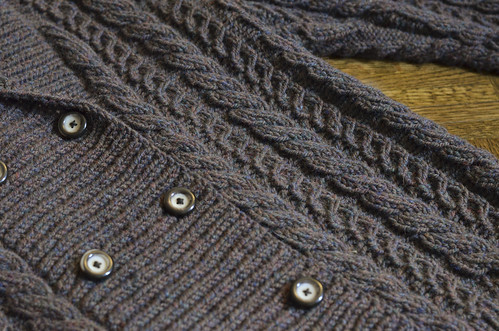 In sewing on the buttons I remembered a good tip that I learned years ago through knitting internet lore, which I will now pass on to you, dear readers. When you’re sewing buttons onto a heavier weight garment, feel free to use lighter yarn than the one you knitted the garment with (still recommendable to match the colour of the garment, but hey, you do you). My habit (much like many others, I am guessing) is to sew on buttons using the same yarn I knitted the sweater with. This generally works out fine for sweaters knitted in worsted weight and lighter, but that’s just not feasible for bulky. So, this is where the yarn remnants bin comes in handy. (You’ve got one of those, right? The place where your bits and bobs and half-skeins for “it might come in handy someday” go? This is one of those handy times. 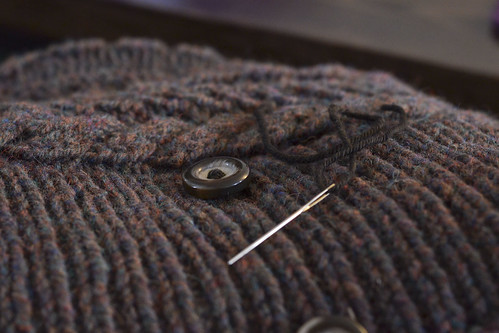 Some of you folks were asking about where to find Briggs & Little yarn online. Excellent question! I tend to grab mine in person in shops when I find it (Romni Wools here in Toronto carries, I believe, all of their yarn lines), but it can be found online. Ram Wools has several of the Briggs & Little lines, as does Wool-Tyme. I’ve shopped both of those places in the past and had good experiences. Neither of those folks carry Atlantic, though, which is less helpful if you’re trying to knit this sweater with the called-for yarn. I discovered this online shop does carry it – I’ve never shopped there before but it does come up on a search, so that tells me there are indeed some options out there if you look! And you never know, your local yarn shop might have it too. 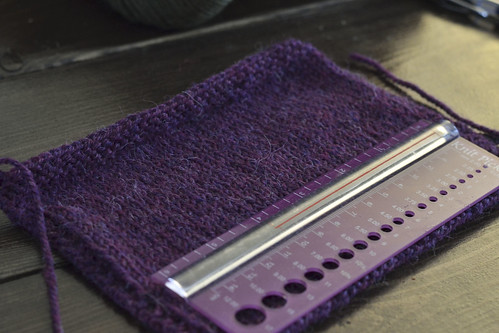 Now that I’ve finished this sweater it’s time to get the next one on the needles – always a fun treat. It turns out I can’t subsist 100% on sheepswool knitting alone, so for a change of pace I’m swatching up with some Ultra Alpaca and an eye on some sweater patterns I’ve had queued for a while now. Hoping to have new developments there next week!

I hope your sweater knitting is going well in your corner of the world! And if not, that your weekend has a glass of wine in it for you. Happy Friday!