My friends, it has been a winter. Not the worst winter ever, but definitely one filled with cold and ice and its fair share of colds and minor illnesses. While I’m never in a hurry to get to the heat of summer (If it could top out at like 28C and then dip down to like max 15C overnight that would be great), I am enjoying the prospect of not having to lie in wait for a surprise ice storm for another few months.

Despite the changing seasons, I am, however, going full blast on knitting wool sweaters.  Allow me to explain. 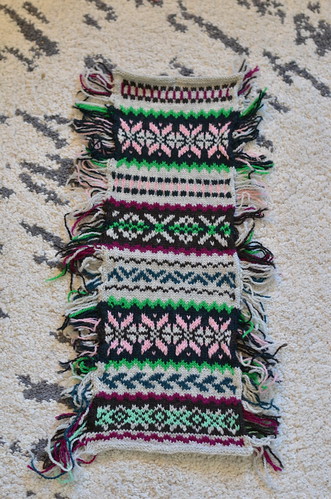 I figured since I’m going to Scotland I might as well dust off my colour-work action and knit a fair isle pullover. However, I also wanted to aim for a bit of a contemporary vibe and keep some bright colours in there – almost in the direction of a J Crew catalog but not quite.

Over Easter weekend, I got to swatching, which is what you see in the photo above. It’s a long swatch, because my goal was not just to swatch for gauge, but to try out colour combinations and stitch patterns, and see what I wanted to use in the actual sweater. The bottom half of the swatch is where I started, and by the half-way mark you can see the point where I started making some changes: The dark sea blue got discarded, as did the minty green. I decided only one green or blue could survive, and the less vibrant ones got voted off the island.

By the halfway mark I also switched needle sizes by going down a size, and really like the way it turned out in the end. (This kind of change results in me needing to cast on more stitches for the same size and therefore signs me up for more knitting, not less, which is also a fun development.)

Results: I’m using 3.25mm needles for the main pattern, getting 8 sts/inch, and using a total of 6 colours. 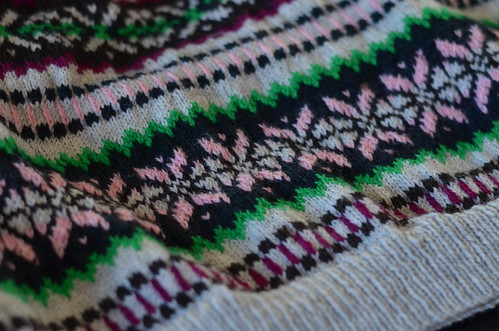 Since then I’ve been working away pretty steadily on this, and in less than a month I’ve managed to knit the body all the way to the under-arms, and one-and-a-bit of the sleeves. I’m working this as a seamless raglan worked from the bottom up, and will be planning a simple crew-neck to finish. Here’s hoping it all works out and gets done by the middle of May, which is when I depart.

The truth is that while I’m using a bit of travel as an excuse to knit this sweater, I’ve been thinking about it for about 2 years and just hadn’t managed to get it on the needles. Travel knitting is a great deadline – in my mind, I’ve already packed this sweater in my suitcase. 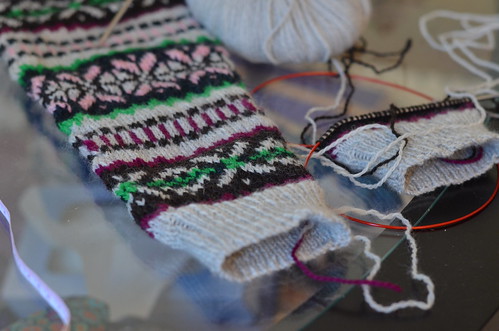 It has been a long time since I’ve worked on a stranded colour-work project and it’s been great to come back to. In fact, starting in on the second sleeve was about the point where I finally started to drag a bit in my pace – which is pretty great for being past the halfway point now.

So, I’ve got about 2 weeks to finish this one and – in theory – another cardigan which is also about 75% done. But I’m going to keep you in suspense on that one for another day – there’s some yarn supply drama involved and I think it deserves its own post.

Knitter friends, I hope you’re doing great, that you’ve had some good knitting time this winter, and that you’ll drop a recommendation for your fave things in Iceland, Glasgow, Shetland, and Edinburgh, if you’ve got one!